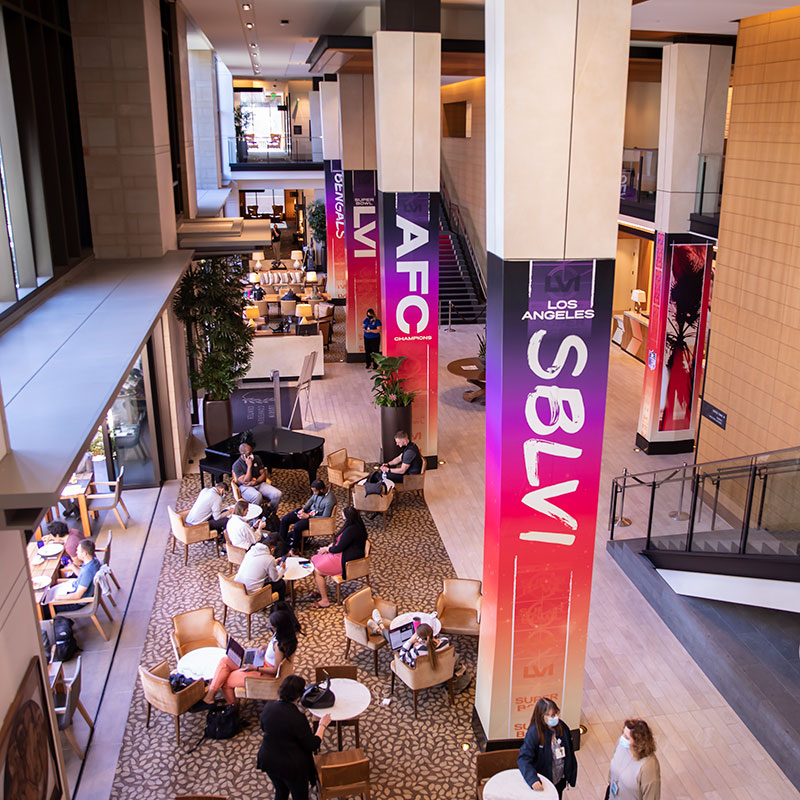 From the moment the Cincinnati Bengals touched down in Los Angeles to the morning they left to return home on Feb. 14, the Luskin Hotel and Conference Center was awash in “Who Dey” energy.

“This was a wonderful opportunity to demonstrate excellent hospitality and service, and show the world that we are an amazing venue for individuals, events and programs of all sizes and types,” said Tony Perrone, general manager of the Luskin Hotel and Conference Center, adding that the hotel worked with NFL Media to transform the hotel.

Los Angeles played host to the first Super Bowl in 1967, but hadn’t seen the Big Game played in the city since 1993. This year’s match ended with the Los Angeles Rams claiming a 23-20 victory over the Bengals in SoFi Stadium.

The Luskin Hotel and Conference Center was selected due to its ability to provide convenient access to excellent practice facilities, weight rooms and meeting rooms, said Perrone. The Bengals trained at UCLA’s Drake Stadium and used the Wasserman Football Center, an elite training facility that is home to the UCLA Bruins and just steps from the hotel. Bengals fans came out daily to eagerly catch a glimpse of their favorite players as they walked between locations. Following the Super Bowl, the team, along with their friends, families and other guests, enjoyed an after party at Pauley Pavilion, right next door to the hotel.

The Luskin team’s understanding of what goes into feeding elite athletes was also an essential selling point. In addition to preparing team meals for the Bruin football and basketball teams — and hosting visiting college sports teams — many members of the Luskin culinary leadership group have worked for professional sports organizations, including the Clippers, Lakers, Sparks, Kings and Dodgers.

“There is a wealth of experience here,” said Chef Joey Martin, adding that different teams have different requirements. “One common theme is that they want good fresh food for anyone, whether its grass-fed beef, organic chicken, more whole grains or whole wheat pasta,” he said. “We can give them ideas and let them know what is in our wheelhouse and what we have previously done for our UCLA Bruins football team, but it’s really the team that designates which direction they want to go.”

Martin and his team worked closely with the Bengals nutritionist to ensure that the players’ individual needs were consistently met. Professional football players, on average, eat two to three times as many calories per meal as a regular guest, he said.

The team’s friends and family also checked in to the Luskin Hotel in the days leading up to the Super Bowl and were treated to a reception in the venue’s olive tree courtyard that welcomed them to sunny Los Angeles. They also enjoyed Bengals inspired cookies that the culinary team prepared to make them feel at home.

This is not the first time the Luskin has served as an NFL team hotel. This season, the New England Patriots also made the Luskin their home away from home while in town taking on the Chargers.

“We expect greatness from ourselves no matter who stays with us,” said Perrone. “No matter the size or the profile of the group, we put the same intensity into every experience as we did the Bengals. Everyone is a VIP.”